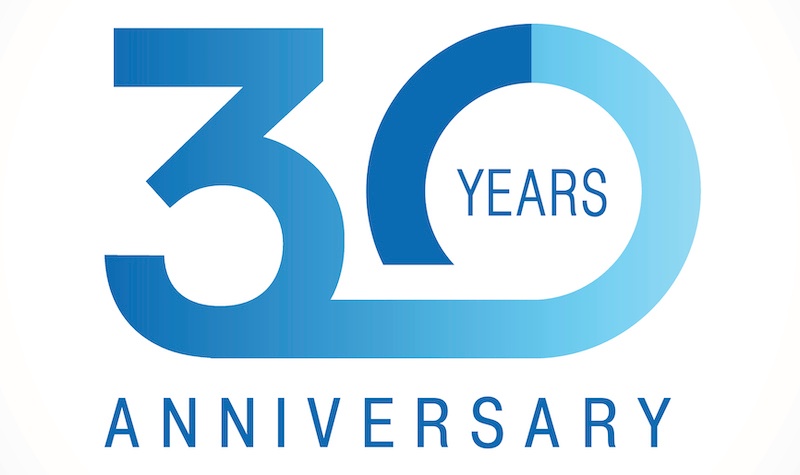 ADCi has been providing digital map data and services to engineers, GIS professionals and developers for three decades! Our 30th anniversary celebration gave us an opportunity to reflect on just how far we’ve come since 1988, and we’re inviting you to reminisce with us. Here are 15 things you probably didn’t know about ADCi:

1. The concept for ADCi is attributed to a request company founder Michael Bauer (Mike) received from a friend to convert digital bicycle route maps from USGS DLG files and Census Bureau TIGER files into AutoCAD format. While the original purpose behind the request was to make printed maps for bicyclists, Mike soon learned that the demand for digital maps in AutoCAD far outweighed that for printed maps — and his business was born.

2. Mike was a full-time commercial airline pilot for nine years after founding ADCi.

3. Our first advertising was done on Compuserve. ADCi posted sample maps and asked if anyone could use them. It worked!

4. We once ordered U.S. Geological Survey (USGS) data that we really could have used a forklift to unload! Back in the day, computers couldn't handle large amounts of data so the USGS used magnetic tape to store files. The magnetic tape reels didn't have much capacity, so it took many reels to fulfill our request for data encompassing the entire United States. Pallet loads of magnetic tapes arrived and we had no other way to move them into the office than by hand.

5. In the late 1980s, delivery time was six weeks and we likely delivered your data in a plastic box filled with 3.5” floppy disks.

6. The company used to be called ADC. We added the ‘i’ in December of 1993 when we went to register our domain and discovered “adc.com” was already taken.

7. We are in our sixth office location.

8. ADCi currently has eight employees. At our peak we employed 23, but we have operated with as few as four employees.

9. The ADCi technical team has more than 37 years of combined experience.

10. Our longest tenured employee has been with ADCi for more than 24 years.

12. ADCi has been an Esri Business Partner for more than 25 years.

14. ADCi first partnered with TomTom in 1991, when they were known as Etak.

15. In 2001, we partnered with a company known as Navigation Technologies. Today, that same company is known as HERE.

It’s said that to know where you’re going you have to know where you’ve been. This trip down memory lane reminds us of just how much ADCi has evolved in 30 years and we’re excited to see where the next decades take us. Be part of the journey by finding out how we can help you. Contact ADCi today!